Home / General / When tragedy struck ‘The Phantom of the Opera’ 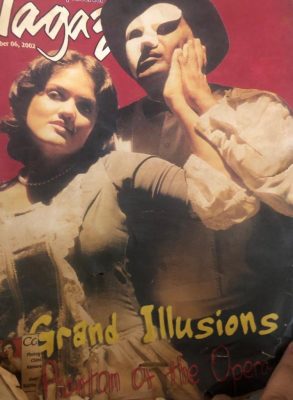 This morning I received this text message from Jerome L. de Silva – “Today 17th October, the 18th anniversary of one of my DARKEST DAYS … the cancellation of PHANTOM”.

It certainly was. It was to him and to the entire Workshop Players theatre company. In as much as they were all understandably stunned and broken that evening, Colombo too was in shock.

I reproduce below Chapter 15 of the Bonsoir Diaries (2013) which recounts that evening :

It was 2002. The Workshop Players was going to do its most spectacular production, ‘The Phantom of the Opera’, based on the novel by Gaston Leroux.

The young Serala Athulathmudali was to be Christine, there were three Raouls – Dushyanth Weeraman (long before he became the star he is today), Manoj Singanayagam and Sean Amarasekere, while JLdeS was to play the Phantom, in what was going to be his swan song.

Yasmin Rajapakse, my erstwhile colleague at Bonsoir had contacted LJdeS and planned a special programme. She filmed the last sound and light prior to opening night.

I refused to go since I wanted to see the real full blown thing. All nights were sold out. I remember having bought tickets for both opening night and the closing night.

It was around 5.00 pm on 17 October 2002, barely hours before opening night, when JLdeS grimly informed the cast and crew, most of them in costume and make-up, that the show had to be cancelled “due to unavoidable circumstances”.

There was disbelief and horror backstage. “Never had so many tears flowed at the Lionel Wendt”, Surein recalls.

To JLdeS it was the second ‘death’ that year. His mother Etta Anabella had passed away six months earlier.

He put on a brave face, but they all knew that he was performing, agonising inside him.

One of the cast had had a miscarriage, the shock was too much to bear.

Colombo was in shock too. We (unofficially) heard that someone had sneaked about a copyright and license issue and hence the cancellation.

The organisers were very thoughtful and informed everyone that they could have their tickets refunded, is they so wished.

I was disappointed too, very. I remember tearing my four tickets into little pieces and delivering the shreds to JLdeS. A lot of people I knew did likewise.

That was our way of showing our faith in, and solidarity with, The Workshop Players.

Surein de Silva Wijeyeratne sums it up beautifully ….. “The cast has moved on with their lives, with only their memories of that final night to keep them company. All that remains is a rusted chandelier, boxes full of stunning costumes, a few photographs and an empty place in our hearts. Our production, that was supposed to be a milestone in our history, is now nothing but water under the bridge. The only satisfaction is that we actually managed to do the show that everyone said could never be done”.

The Music of the Night

I hasten to add my own PS to this : I curse myself at times for not having joined Bonsoir and sat through that final sound and light rehearsal prior to opening night. It had not been a rehearsal. It had been a perfect performance.

“Life is a theatre set in which there are but few practicable entrances” – Victor Hugo, Les Misérables

(END OF Chapter 15 of the Bonsoir Diaries)

The members of the Workshop Players were undeterred, they dreamt and they knew that one day they would surmount all obstacles and  recreate the magic all over again.

I have often asked myself, what that miserable and disgusting saboteur must have felt when he sat in the dark at the Lionel Wendt Theatre and watched Le Fantome de l’Opera unfold in all its grandeur. That question has remained unanswered for the past eighteen years ….

ADDS Surein de S. Wijeyeratne today : Sometime in 2013, I saw a small news article about how performing rights for The Phantom was, for the first time in history, being released for amateur performances in Australia and New Zealand. We immediately decided to take a shot at it and made our own application. And a few weeks later, it was accepted. This was incredible because we would finally be able to redeem ourselves. We went all in to re-create a newer and better version of the production for our audiences and thankfully we were able to do just that. We were on pins the whole run wondering what may go wrong this time around. The joy at the end of the production was indescribable. Pure bliss. The curse was finally lifted.