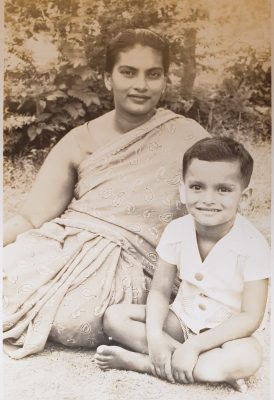 Kohuwala, Nugegoda, in the mid-1960s was a verdant suburb, rural and perhaps village-like too. Life was leisurely and meandering. Green Path was a narrow ‘lane’ with no street lights if I recollect right. If there were, they might have been like 15 watt tungsten bulbs. Houses were far and few between with no parapet walls but hedges instead. Some had basic rickety wooden gates that groaned on their hinges while others had stiles.

I never ventured down Green Path. The furthest I would go down was to ‘Mynah House’ to talk to the mynah. This was a little house which had a mynah in a cage dangling from a tree. We would stupidly talk to each other much to the amusement of the elders.

The most visible occupant down the road was St. Joseph’s Seminary with its sprawling gardens and to which I shall dedicate an entire chapter down the line.

The Rector in charge at that time was Daddy’s friend, Fr. Andrew Peter Fernando, a deep-voiced and burly man of the cloth. Well, burly he seemed to little me

I remember Mummy telling me that the famous Dr. P.T de Silva lived up the road. I remember my paternal Aunt Laura religiously making a monthly visit to Kohuwala in the ‘Ruhunu Kumari’ (southern line train) all the way from Ambalangoda to consult “PT”. He had been a family friend and Aunt Laura, terribly exacting as she was, swore by him.

Dr. P.T. de Silva and his wife Kusuma lived in the ancestral house. He hailed from Mahawewa, Chilaw and was known to my ex (late) father-in-law Howard Dharmasiri who hailed from Madampe. She was a Miss Weerasekera whose father hailed from Thotagamuwa (of Sri Rahula fame).

Her siblings were Parakrama, Ananda, Mahinda, Gamini, Rupa and Dulka, and, her cousin I learnt was the celebrated Ollwyn Weerasekera of the ‘Beach Wadiya’ fame.

My ex mother-in-law Sujatha Dharmasiri (nee de Zoysa), herself a resident of Nugegoda for 70+ years, tells me how, in the late 1950s, she used to “walk across to Green Path to meet the Weerasekera girls”.

Dr. P.T. de Silva was a General Physician and started his private practice at home in Green Path after retirement. His two sons Prof. Janaka and Prof. Asitha took after their father in the medical profession.

At No 18 Green Path, just before the Seminary lived the Pereras – Mr. and Mrs. D.D.M. Perera and their four daughters Ranjini, Srima, Sunanda and Jayanthi, and the youngest, their son Gamini.

It was a traditional old house with ‘Sinhala ulu’ and the customary ‘issaraha kamaraya’ (front room). A chest-high box-hedge separated the house from the road. As was the norm at that time, neighbourly greetings took place over the hedge and whenever Daddy carried me, I could see right into their house.

They the Pereras and we the De Silvas were good friends. Friends up the road and friends further down the road. They visited us and we visited them and totally unannounced too.

My younger brother Nirmal was very, very small and so the Perera ‘children’ were my playmates. They were 15+ years older than me, all in their early 20s, like very older sisters and very young aunts all in one. And so, much of my free time was spent in that house.

In their front room was the shrine – a seated Buddha statue in a glass-fronted wooden structure, more like a large cuckoo clock. It was affixed high up on the wall. Just below was a wooden shelf on which they kept “lunch for the Buddha” and a little glass of water “to drink after lunch” amid the flowers, joss sticks and a little clay lamp.

This was pure magic to the eternally curious, three year old, little Christian boy in me.

“Why are you keeping food and water for him? He is a statue”, I remember asking one of them very perkily.

“He has to have his lunch just like you have yours”, she replied seriously.

“Apooo no you cannot. He is very shy. He only eats after we have left the room”, she said and ushered me out, closing the frosted glass paneled door behind her. Gullibly I believed her for I knew no better.

When I returned in the evening to play with them, I made a beeline to the front room and lo and behold Buddha had eaten everything, even the vessels were washed and clean.

Foolishly I believed this for years … that Buddha had opened the little glass door by himself and come down, eaten lunch, drunk water and gone back into sitting position.

During those days in the mid-1960s, radio was all we had and that too only the Ceylon Broadcasting Corporation. Entertainment came in the form of radio plays. My very first introduction to “Muwan Pelessa” comes from that time. I was too small to understand but the Pereras faithfully listened to it. It caught on at home and Daddy and Mummy also began listening to it.

It made very interesting neighbourhood conversation material the following morning, all about Korale Mahaththaya and Hamine and the rest of the villagers. They created a succession of images in my mind. Years later I remember getting hooked onto ‘Muwan Pelessa’ and to a lesser degree ‘Monara Thenna’

Well baths were a treat. Although there was water on tap, the Perera sisters and brother bathed at the well and they bathed me too.

Adjoining the well was a shallow cement tank into which they poured cold water from the well in the morning. The sun played on the water over a couple of hours and warm, pre-lunch baths were thus delightful.

My first introduction to a “deli kussiya” (soot kitchen) was at the Pereras. It had a fully functional mati pooranuwa (clay oven) too. With an abundance of trees of different kinds, all their firewood was from the garden.

The back garden extended way down as far as my eyes could see. I remember Menika the domestic aide drag the firewood, the dried coconut palms etc and then split and neatly stack them.

Coconut shells were sun-dried and used both to light a fire and also to burn incense in the evenings when the Buddha lamp was lit. I was taught how to string two coconut shells together with a thin coir “lanuwa” and walk on them like a stilt-walker, with the coir lanuwa between my first two toes.

And so a stilt walker I was … three inches off the ground at that !!!

With four daughters and a female domestic aide, Mrs. Perera’s kitchen was a hive of activity. Early April, it was like Santa’s workshop in the countdown to the Aluth Avurudu. There they were sorting, washing, drying, peeling, cutting, chopping, winnowing etc.

My introduction to ‘rasa kavili‘ (sweet meats) was around this time. They made all their sweet meats at home. Mrs. Perera’s ‘mung kevum‘ (green gram oil cakes) were like ambrosia from the heavens to the little me. Even to this day mung kevum is my all time Sinhala and Tamil New Year favourite.

Little as I was I remember helping in the pounding of the flour, sieving it etc etc etc but never ever did they let me near the fireplace. I believe I might have made a total pain of myself hanging around six busy women, and to add to their agony, asking them innumerable questions, non-stop. Kind as they were, all questions were answered.

The icing on the cake, and totally un-connected to the Aluth Avurudu was on a random morning on a random day. I have no recollection whatsoever of this incident.

It was related to me recently, by Ranjini Akka, the eldest of the girls and now in her eighties. Imagine my great delight …. re-connecting with her after fifty years.

Mummy and Daddy had had this habit of dropping me at the Pereras when they both had to go out. On one such day ‘maalu karaya’ / pingo fisherman had come and gone and the neighbourhood cats were smacking their lips in glee.

The Pereras were going to have fried ‘salayas’ for lunch. Fish mongers have this terrible habit of generously sprinkling wet sea sand on their wares. They religiously claim it’s done to keep the fish fresh, but in reality it simply increases the weight.

Unnoticed by her, three year old me had apparently been intently watching her for a good five minutes, and then gingerly walking up to her I had asked in all dead seriousness, “Mrs. Perera, why are you playing with dead fish?”

She had been aghast not knowing whether to laugh or cry !

NEXT : St. Joseph’s Seminary, across the road.