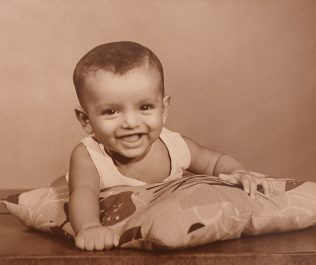 My birth certificate says that I was born late in the night on Thursday 20th December 1962 at St. Anne’s Nursing Home, Ward Place, Colombo 07.

I was named Egodage Justin Charles Kumar de Silva and yes that’s quite a harangue I’ve been saddled with throughout my life.

My parents Manel and Justin de Silva were both (Maharagama Government Teacher Training College) teachers. He started off at Royal College and then came to Wesley College, Borella.

They were also parishioners at St. Paul’s Church, Milagiriya where the Rev. Christopher Mutukisna (fondly known as Fr. Sperry) was the officiating priest in charge. (Please note it is Mutukisna and NOT Muthukrishna).

I was a Christmas baby, the first born and a son at that. I was to carry our Ambalangoda family name Egodage. There was great rejoicing too. It was a good start, to be caught up in the all-pervasive Christmas euphoria which then extended to the year-end festivities and then to the heralding of a brand new year.

This pattern has faithfully followed me with the regularity of a metronome, every December since 1962 … Birthday … Christmas … New Year. It really was and is still a wonderfully infectious feeling.

Two years prior to this, on 22 July 1960, my parents had married at St. Paul’s Milagiriya, and I believe Rev. Christopher Mutukisna had officiated at the morning wedding.

Co-incidentally, exactly half a century later my daughter Anarkali was born on this same date and around the same time, in the morning.

It was thus to be expected that I was baptised at the Baptismal Font at St. Paul’s Milagiriya and by the same Rev. Christopher Mutukisna.

A cold, wet and rainy morning in March it was the following year and I’m told I had wriggled and bawled out to the high heavens when Rev. M. poured cold water onto my bald head.

Well that was my official start in life. A very festive and noisy one at that.

Daddy and Mummy lived in an upstair ‘flat’ down one of those roads along Galle Road, Bambalapitiyathat run down to the sea. They had had Nancy the maid and Rocky the pet Alsatian for company even before I arrived.

Nancy had been with the family for years. She was a short and wizened old woman with piercing eyes and a great sense of humour. And when she laughed at her own jokes, her ill-fitting dentures laughed too.

It had been a comfortable little flat with a beautiful, unpolluted view of the beach and the sea. My parents had often sat on the little balcony and admired the sunsets. They told me how they watched the trains go by, and by which they even told the time of the day.

During the post-Vesak monsoons they had apparently watched the massive rains steadily approach the coastline from far away across the Indian Ocean accompanied by rumbling thunder and streaks of lightening splashed across the night sky. That little balcony was their ‘spot’.

I was told that a few months after my birth and arrival at the flat, there had been strange happenings.

Firstly Rocky had been behaving very strangely. For a few weeks he had been growling menacingly, at odd times of the day, especially at late evening. He had kept turning his head as though he was following an invisible person. My parents saw no one. They thought it might have been a gecko or a stray rodent.

Around the same time, Nancy our maid had told Mummy how she enjoyed the strong fragrance of fresh jasmines that occasionally wafted in from the kitchen window, especially on pre-Poya nights.

They were both similarly nonplussed since the garden below did not have any flowering plants but just the regular crotons and cannas and anthuriums and colias and begonias.

Their ‘bathroom’ had an old English bathtub with the shower positioned over it. One had to get into the bathtub if one wished to stand and bathe. I don’t think hand showers existed in Ceylon in that era. The shower had no shower head and so water just poured into the metal bathtub making a continuing and annoying din.

Once, late one night, after midnight, Daddy had heard the bathtub filling with water. He was non-plussed. In the light of the pre-Poya moon, he saw Mummy asleep, beside him. I was too. He had gone into the bathroom and found the bathtub bone dry. There was nothing. But he had heard the din of water falling into the metal base. Rather disturbed, he had not mentioned a word to Mummy.

Weeks later, my parents were on the balcony one night, watching the pre-Poya moon turn the sea into heaving, molten silver, when Rocky had begun barking in the bedroom. I had been asleep in the cot. They had shushed him many times but with no success. He had then come to the balcony and continuously nudged Mummy as though asking her to follow.

Annoyed, she followed him to the cot. With his snout he had pointed to the mosquito net. Within split seconds she had managed to wrench away the net from the cot and with it the large ‘mapila’ that was about to drop on me. All hell had broken loose. Had it bitten the infant me, the doctor said I would have died that night. Dear Reader, You would not be reading this blog either.

Bashing it on the head, they killed it immediately and burnt it in the garden below. More drama followed when they were told of a local belief that ‘mapilas’ come in sevens and not in singles.

According to Wikipedia : Boiga ceylonensis (Sri Lanka cat snake) is a species of rear-fanged, mildly venomous, nocturnal, arboreal colubrid snake endemic to Sri Lanka. This snake frequently ventures into human dwellings in search of prey such as gecko. It has somewhat aggressive disposition and boldly strikes out when disturbed or cornered. This snake is known as Nidi mapila by the Sinhala speaking community of Sri Lanka.

The household was on edge for the next couple of days and when the mapila brothers and sister didn’t come in search of their dead sibling, peace returned. The following Poya weekend Daddy had to go to Ambalangoda, his hometown, overnight, to settle a land dispute.

All was well. Late that night, Mummy, relaxing alone on the balcony and enjoying the pre-Poya moonlight, had heard the bathtub filling and Daddy splashing and whistling. She thought he had finished his work earlier than scheduled and returned from Ambalangoda to surprise her.

To surprise him in turn, she had made a hot cup of coffee and had it ready in the thermos flask by the bedside table. Poor Mummy had waited and waited but Daddy never appeared. The sound of water had also stopped and there was neither splashing nor whistling. She had called out his name. There had been no answer. When she opened the door, the bathroom was empty and the bathtub bone dry.

Mummy had screamed. Nancy had jumped up out of deep sleep from her mat in the kitchen and come shouting, “Mokada, Mokada?”. In the ensuing melee, she dropped her dentures. An excited Rocky pounced upon them with glee and ran out onto balcony. That was a parallel drama. The din had awoken the months old me and set me on a wailing spree. All hell had broken lose.

This was clearly supernatural. The wretched flat was haunted. There was no telephone. The occupants downstairs had gone away for the weekend. The two women were marooned in this lonely, haunted, upstair flat with a helpless, bawling infant and a brave dog who wouldn’t part with Nancy’s dentures.

The poor women had kept awake the whole night with all the lights on and had fallen asleep only when dawn broke. Daddy arrived that afternoon and didn’t tell Mummy of his similar experience weeks prior, for fear of freaking her out even more.

Mummy had taken Nancy and me and fled … gone to stay with a friend, never to return to the flat. Daddy in the meantime had spoken to church friends and that’s how we moved to No 209, High Level Road, Nugegoda to the vacant annexe of Dr. Jacob Gogerly-Moragoda.

It later transpired that this flat was once occupied by a Judge in the 1950s. He had been a lonely widower whose children had abandoned him. Whenever he had condemned a prisoner to the gallows, he used to sit on the little balcony and gaze at the sea till late into the night, repenting the condemnation. He might have gone into depression, we never know.

One full moon Poya morning he had been found dead, hanging by a rope from the rafters. They called it suicide. He had hung himself on a pre-Poya night.

The building still stands, as does the ‘flat’, both in Bambalapitiya … and still in operation.

NOTE: The original St. Anne’s Nursing Home was located at Ward Place in Colombo 07. This is where both my brother Nirmal and I were born. It was run by Rev. Christopher Mutukisna’s very efficient wife Mrs. Rene (Irene) Mutukisna née Sirimanne. She probably named it after one of her daughters Anne, the other being Christine. Mrs. M. had also added the prefix ‘St’ and so it became ‘St Anne’. The Nursing Home was later relocated at De Kretser Place in Bambalapitiya, more closer home to St. Paul’s Milagiriya.

THANK YOU: Ramola Mutukisna Sivasundaram for helping me with the historical accuracies.