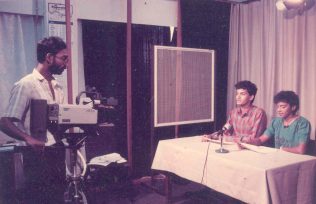 The Embassy of France in Sri Lanka is at 89, Rosemead Place, Colombo 07. It has been there since the year dot, I think. This was once a quiet and shady tree-lined avenue devoid of the high rises and commercial establishments it has today. I was told that, once upon a time, it had played home to rose meadows and hence the name ‘Rosemead’. I don’t quite know its veracity, but I often tried imagining the fragrance emanating from rose meadows fusing with the aroma of cinnamon from the gardens nearby ….. aromathérapie Colombo.

The Bonsoir Studio was housed in the French Embassy. The current Cultural Affairs Counsellor, the genial Michel Treutnaere, and his team now occupy what was once our former studio. I still often end up in a time warp and get very nostalgic, whenever I visit him in his office.

Ours was a far cry from what a TV studio was supposed to be – a very large basic rectangular space with cupboards all around. We began with three 01kw lights hung from the ceiling – two in front to light up both sides of the face, the other behind, as a backlight. Railings were suspended from the ceiling in front of the cupboards … and voilà … when the curtains were pulled across, the cupboards disappeared from view.

We had two basic curtains – a black and a grey – as our only backdrops for many, many years down the line. We later hee-ed and haw-ed and got a blue and a green. Our editing unit, the (now) primitive U-matic low band and derogatorily called the ‘gona model’, and camera were in an adjoining smaller room.

When recordings took place, we bolted the main door and hung a notice saying – ‘Ne pas déranger SVP. Enregistrement en cours’ (Please do not disturb. Recording in progress). The old air-conditioners made a huge din and were thus switched off. Phones were unplugged from the wall sockets. Our studio was NOT sound proof and so those who needed to, were told to quickly empty their bladders (and bowels) if need be. The toilet door was then locked with the key safely deposited in my pocket.

It was relatively tough to work in this basic set up. It however spurred our creativity and challenged us in return. Over the years we transformed this basic little studio into a chic Parisian restaurant, the stage of the French César Awards, the Moulin Rouge, the green room of the Avignon Theatre Festival and loads more.

During the early years we had a few technical personnel (cameramen and editors) loaned from ITN. This ad-hoc arrangement didn’t prove to be very conducive. Cultural Counsellor Bernard Prunières then spoke to ITN’s Thevis Guruge and in 1988 we recruited Chinthananda Abeysekera, one of ITN’s Production Officers.

Chintha is the son of veteran broadcaster, poet and lyricist, the legendary Chitrananda Abeysekera, one of the geniuses of his time who excelled in many different fields of aesthetic and cultural activity.

Versatile and multi-talented Chintha ‘trebled’ up as Cameraman, Lighting Specialist and Editor. An asset to Bonsoir with his technical acumen and skill, it was he who volunteered and produced the highly successful Sinhala Bonsoir years later.

If Yasmin was totally crazy and nutty, Chintha was absolutely calm and collected. I found myself swinging between these two polarities. He had a very peaceful and calming influence on our sporadic madness. We grew to be a strong trio and formed a strong bond which resulted in each of us giving of our best to Bonsoir.

PS 01– Ah I still remember Yasmin and I waiting every morning to pounce on Chintha’s “ala paaang” – fresh bread from the bakery behind the Manning Town flats, a hop across the railway line, stuffed with delicious, home-made potato mix. He was very often left with the crumbs !

PS 02 – That bakery is still there. The bread is still great. So are the maalu paaaangs and the roas-paaangs ! Try them !