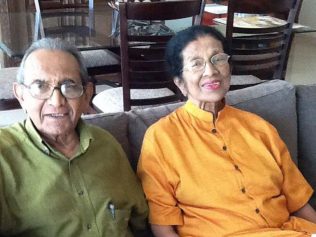 Three years ago, something snapped in Cedric when Sita (nee Dunuwille), his wife of nearly half a century passed away on 10th June 2018. He came to the AF Raymonds funeral parlour where Sita’s body lay. He slowly walked around the coffin, then sat on a chair and began talking to a friend.

After a while, he had got up and said, “I will go home now and come back for the funeral with Sita”. Such had been his state of mind.

If Sita was the wind beneath his wings, which she truly was, Cedric was then the rock on which she leant. Their relationship was symbiotic and together they made a formidable duo.

Formidable to the extent that Cedric and Sita had two children together whom they loved dearly. Their older child is the George Keyt Foundation. The younger one is Kala Pola, now 28 eight years old, the more colourful and flamboyant one.

Cedric and Sita also had children of their own. Yasmin Gomesz (nee de Silva) recalled this morning, “He was a devoted grandfather to my children. I remember him driving them around Colombo for their classes and their various activities. I can still picture him sitting on the steps at our Ananda Coomaraswamy Mawatha house and feeding my daughter Anishka. We will truly miss him, dearly”.

“Another heart rendering memory was, for over a year after Mummy’s passing, when he used to constantly call out for her saying “Darlo, Darlo”. I can’t believe that he only gave up his fight close to eleven days short of three years after her passing”, Yasmin said.

“I also remember Mummy making him eat, drink his water, exercise his legs morning and evening as if he were being trained to run a marathon. She was his driving force as he was a quiet, intelligent man of a few words. I owe his success to her”, Yasmin added.

In his professional career Cedric was also a Director of the Insurance Corporation and Chairman Employees Trust Fund and from 1955 to 2005 he was Precedent Partner of Tudor V Perera & Company.

The concept of ‘Kala Pola’ and the very existence of the George Keyt Foundation owe it all to this couple. The both of them were very close friends of Keyt and were the founder President and Secretary (respectively) of the George Keyt Foundation, their brainchild. They had the right connections too. They had Prof. S.B. Dissanayake and historian Ian Goonetilleke among their ever helpful ‘cultural allies’. They both took pride in these ventures.

Conceptualised by the George Keyt Foundation, Kala Pola, Colombo’s annual open-air ‘marché d’art’, enjoys the unbroken patronage of the John Keells Group for 27 out of its 28 years, and the vast majority with Cedric as its Chairman.

Says Mike Anthonisz, the incumbent Chairman of the George Keyt Foundation, “We owe it all to Cedric and Sita. Their sharp foresight and continuous perseverance nearly thirty years ago not only put Colombo on the art map of the world, but it also became a launch pad for many celebrated artists today and even more significantly, an annual means of a substantial livelihood for hundreds of artists from different parts of Sri Lanka”.

My association with Cedric and Sita was mainly through ‘Bonsoir’ and ‘Kala Pola’ ever since the latter’s inception. Even at that time I was struck by his total sense of calmness and his sheer sobriety. Organising an event of that magnitude was a Herculean task, a nerve-wracker, especially when you had multiple players to deal with. But Cedric’s calm prevailed.

I quote from The Bonsoir Diaries : “The riot of colour at Kala Pola is a treat to the eye, not only from the exhibits but also from the visitors. Here was also Colombo’s annual indulgence, to feel European, to don hats and berets, to parade with parasols. It was chic and très à la mode”.

“A stickler for perfection, Sita, the ‘grande dame’ of Kala Pola, was often there very early in the morning, checking on last minute details so that it all would go to perfection. There were years when exhibitors surreptitiously included handicrafts, ‘macrams’ (as they called them), batiks and pottery etc in their little stalls. It all fell into Sita’s keen radar. That’s when she swiftly s-p-r-a-n-g into action, went up to every single one of them and politely got the offending exhibits banished in a flash of lightening”

Thank you Cedric and Sita, for ‘Kala Pola’.

You’ve kept George Keyt’s name alive through the Foundation which bears his name.

But the both of You will forever live on in ‘Kala Pola’.

Blessings as you continue in your journey beyond !