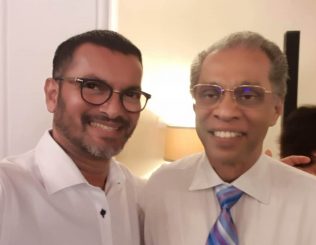 That evening, at the Mayoral Residence down Sir Marcus Fernando Mawatha, was a beautiful Memorial Service to which friends and family and colleagues were invited.

It was more to ‘celebrate’ Athula’s life rather than to ‘mourn’ his death.

That’s how he had wanted it to be and that’s how it happened … with beautiful gospel music interspersed with short, nostalgic speeches recalling the multi-dimensional person Athula was.

At the end, just before the final hymn ‘Amazing Grace’ was sung, Thisakya announced that Pastor Tissa Weerasinghe would speak.

That moment instantly took me back 45 years to the early 1970s to the same, and much younger Pastor Tissa Weerasingha of the Calvary Church in Siebel Avenue, Kirulapona, whose Sunday School my little brother Nirmal and I attended. I was eleven or twelve years old and not even in my teens.

I listened attentively as Pastor Tissa spoke that evening …. of Athula … of Rosy … and of life … and the only thing that struck me was the eloquence with which he spoke and the charisma he exuded 45 years ago had only ripened and beautifully matured over nearly half a century.

In the early 1970s, the Calvary Church was where one end of Rajawatte Terrace branched off Siebel Avenue, Colombo 05. It was a large, relatively spacious upstair house with a moderately spacious garden.

The large ‘hall’ of this house was where the congregation sat and followed service. A stairway ran up the right hand side wall leading to the upper floor. And that’s where I think some of the classes were held.

We had then recently moved into Rajawatte Terrace from Lily Avenue, Wellawatte. The St Paul’s Milagiriya Sunday School which I had attended for years was now too far to go to and so my parents sent my brother and I to the Calvary Church which was exactly ‘three houses away’.

The Sunday School service was a treat. We sang and clapped and raised our hands in praise of the Lord. We sang in English, Sinhala and Tamil so that it was all inclusive. Mind you the children came from different ethnic, economic and sociological backgrounds. But we were all treated alike.

Music came from the box guitar and Miss Virgie on the (electronic I think) organ and sometimes (the now well-known artist) Royden Gibbs on trumpet. The latter’s children Gillian and Rhonda and Michael were neighbours and Sunday School mates.

We sang many songs and hymns whose words were projected onto the back wall of the stage. This projection process was new to us and very novel.

The teachers stood on the narrow, long elevated stage that ran along one wall. It might have been one foot tall. But it seemed very high to little us. There were Sister Grace and Sister Pauline (they were sisters in real life and I hope I’ve got the names correct) and some others whose names I fail to recall.

One particular song was “I want to run run run to see my Jesus … when He comes when He comes”. We all stood in one place and ran, animating this song. The teachers on stage also stood in one place and ran. One Sunday one of them ran so fast in great enthusiasm that she almost tripped over her saree pleats and fell flat on her face. We bit on our tongues or our lower lips to stifle laughter. I bit hard that I mildly bled too.

I remember Sister Ruth Stefannson (I hope I got the name right) and her children. They were Swedish I believe. She was my class teacher and her children were my classmates. She spoke English with a Swedish accent. At the beginning this was rather difficult to comprehend but as the Sundays rolled by, it got more and more comprehensible. They brought in that distinct European flair to this very 1970s Sri Lankan Sunday School. She was a tall, kind and gentle lady. Never a harsh word did we hear from her.

Mary Jones and her Bible

I remember a play we once did at Sunday School. It was called “Mary Jones and her Bible” and told the story of this young Welsh girl, the daughter of a poor weaver.

She learnt to read in the “circulating schools” at that time, organised by the Revd. Thomas Charles, and desperately wanted to own a Bible of her own.

Over the years she patiently collected all the pennies she could, to be able to buy a Bible one day.

“The nearest copy was at a farm two miles distant from her little cottage, and there was no copy on sale nearer than Bala which was 26 miles (42 km) away; and it was not certain that a copy could be obtained there. Welsh Bibles were scarce in those days.

Having saved for six years until she had enough money to pay for a copy, she started one morning in 1800 for Bala, and walked the 26 miles over mountainous terrain, barefoot as usual, to obtain a copy from Rev. Thomas Charles, the only individual with Bibles for sale in the area.

According to one version of the story, Rev. Charles told her that all of the copies which he had received were sold or already spoken for.

Mary was so distraught that Charles spared her one of the copies which was already promised to another.

In another version, she had to wait two days for a supply of Bibles to arrive, and was able to purchase a copy for herself and two other copies for members of her family.

According to tradition, it was the impression that this visit by Mary Jones left upon him that impelled Charles to propose to the Council of the Religious Tract Society the formation of a Society to supply Wales with Bibles.

A girl named Irene played Mary Jones. She was convincing in her portrayal. She wore a slightly tattered long skirt, wrapped a shawl around herself and “shivered” as she walked barefoot 26 miles across the rugged Welsh terrain (on stage at Siebel Avenue).

I was Rev. Charles, the vociferous preacher. I remember being told to bang my fist on the pulpit as I spoke and which I did with great delight.

The beautiful story of ‘Mary Jones and her Bible’ has stuck in my head even to this day.

How the children waited for this day each year. How they all eagerly came dressed in their Sunday best on a Saturday evening to take part in the festivities which began around 4.00 pm.

There was this very tangible, all-pervasive feeling of joyousness which descended upon all of us. We sang and played games and of course we prayed too.

The food was a feast and a large spread too, given the numerous hungry stomachs to feed. I remember the lesser privileged children being given food to take home too.

This generosity occasionally extended to random Sundays during the year when the children were given hot buns and tea, my brother reminded me.

And then there was Santa Claus. How the little ones shrieked, some in visible delight, some in absolute trauma, “Anna Naththal Pappa enawaaa”. There were gifts for all. They were really good gifts. Even as a child I was always struck by how well the Swedes and the Calvary Church looked after their flock. The food was ample. The gifts were generous.

Having been used to infant baptisms, being baptised myself by the Rev. Fr, Muthukrishna at St. Paul’s Church, Milagiriya, adult baptisms at the Calvary Church were something totally new to me. I was understandably intrigued by this.

One part of the wall behind the ‘stage’ had glass shutter doors which, when opened, revealed a large rectangular cement water tank about 3.5ft in height (from ground level) which was used for adult baptisms.

So when (Aunty) Linda Gibbs was baptised, my brother and I made it a point to go for evening service that day, sit in the congregation and get a vantage view of the entire process.

I then learnt, as mentioned in the Gospels, that the baptism of Jesus by John the Baptist in the river Jordan is a significant event in the life of Jesus. That was adult baptism too.

He spoke beautifully and very eloquently. He spoke persuasively yet with authority. He commanded attention.  He knew how to modulate his voice, from seriously low tones to passionate crescendos. He knew how to use his head and his eyes and his hands as he spoke … reaching out to everyone in the audience.

His congregation didn’t stop there. It extended to the road outside to those standing beyond the boundary wall on Siebel Avenue, watching and listening to him and some in parked cars too. He was an audio-visual treat !

I could never understand that relationship between speaker and translator. It was symbiotic. It was as though they lived in each other’s heads. The duo was e-l-e-c-t-r-i-f-y-i-n-g.

Now in hindsight, I believe the public speaker in me today, goes back to my pre-teenage years watching Pastor Tissa Weerasingha talk. I could not help but be inspired by him.

And how deeply, deeply humbled I was last evening when soon after the memorial service was over, he told me that he enjoyed watching me on television and listening to how I talk.

I told him, “Pastor, that is the KdeS of today. But do you know that you knew the same KdeS of 45 plus years ago ?

He was nonplussed and looked quizzically at me. I paused awhile and then told him of all my encounters with Pastor Tissa Weerasingha and my Sunday School days at the Calvary Church in the early 1970s.

I told him, “Pastor, the eloquence with which you spoke and the charisma you exuded 45 years ago have only ripened and beautifully matured with the passing of time”.

He merely smiled, graciously, and said nothing.

I also told him that I had converted in my early teenage years and am now very much a ‘practicing’ Buddhist.

He merely smiled again, very graciously again, and said nothing.

My respect for him leapt even higher !!!!!

PS : Now here’s the most amazing story of them all. I knew and know that Rosy worships at the Calvary Church. But imagine my shock when writing this piece, and parallelly watsapp chatting with her, I learn to my greatest shock and surprise that she had been worshipping at the Calvary Church at Siebel Avenue since 1974. I was 12 and she was 16. As she said, “We surely must have bumped into each other unknowingly, never realising that we would make the connection 46 years later, today”.

She adds …. “I have been all around the world and gone to many churches and listen to many preachers but there has been no preacher to match Pastor Tissa. I have said this at our Church anniversaries too”.