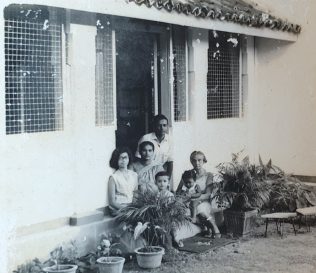 I think I was about three years old when we moved to No 25, Green Path in Kohuwala, Nugegoda. Please note that the ‘Nugegoda’ tag HAD TO be added on to Kohuwala. It was the norm at that time, even with the letters the postman brought us.

No 25 was a spacious old house with a front ‘office room’ on the right hand side, a large hall and dining room along whose right hand side were the bedrooms. At the back was the kitchen. There was a large garden all around the house with trees of every kind. The back garden was larger, verdant and salubrious.

Our landlady was a very kindly old lady call Mrs. Bogaars. I call her ‘old’ because in the mind of a three-year old, everyone above forty was deemed very old.

I never knew her first name. She was simply Mrs. Bogaars. She occupied one of the rooms in the house. I think that was part of the arrangement. She was a live-in landlady. But I hardly saw her. She was there and she was not there.

She had a daughter if I recall correctly, a Mrs. Patternot, a bit of a stern lady who infrequently visited her mother. But this Mrs. Patternot is a vague, distant memory.

Mrs. Bogaars and Daddy argued. They were unpredictable as the weather and they both got on each other’s nerves according to their whims and fancies. Why I could never comprehend. When the volume went above a respectable decibel level, poor Mummy barged in as a peace maker. And then all was calm.

Large though it might have been, the house itself was a very simple structure. The front door faced Green Path. Our front ‘windows’ were meshed. I think we had plastic curtains to prevent the rain from beating in. I cannot remember gutters and so when it rained, the rain fell in sheets.

There was a musty garage on the side of the house. It served as both store room and our play area. Into it we also escaped and hid to avoid beatings. Malli and I were angelic but terribly naughty children. Appearences can be deceptive. Very.

We had no front gate but a stile instead. There were no parapet walls either but a hedge instead. That was the beauty of that era.

Green Path was a very dark and narrow lane. I would not even call it a road. It wasn’t tarred either and nor were there street lights.

Vehicles hardly went down out road and so the road was also my play area.

We would lie flat on the road outside the gate and gaze at the moon and the stars, and chide the cumulous clouds when they blocked our view.

In the evenings we often sat out in the front garden, under a weak garden light, and watched the fire flies fly hither and thither and listened to the sounds from the garden, the frogs and the crickets (if that’s the correct word)

I remember one evening Daddy had gone to the junction to get a packet of Vanilla cigars from Rathna Stores. He was taking long to return and I was impatient.

After a while, in the distant darkness I saw his tall form stride down the road. I leapt out of Mummy’s arms, bolted up the road and jumped into his arms shouting “Daddy, Daddy !!!”.

Daddy’s arms somehow felt different and there was a woman next to him whimpering and crying.

Lo and behold it was a newly married couple living down the road who was returning home after their after-dinner walk.

I must add that after dinner walks were de rigeur in that era. Dinner was at 7pm, then the after-dinner walk, and then a wash and we jumped into bed.

The whimpering young bride thought I was an illegitimate child her husband had secretly sired at No 25. It was only when (a furious and embarassed) Mummy came running and explained what had happened, that she calmed down.

And what happened to me ? I got thrashed that night. Lesson learnt – never jump into the arms of strangers.

NEXT: The Haunted House down Green Path !