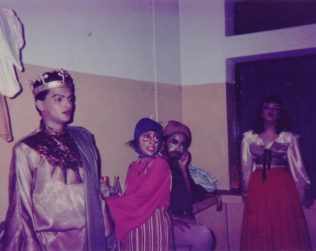 So this was thirty years ago in 1990 when the Wendy Whatmore Academy turned 50 years old and Aunty Bundle (Wendy Holsinger) and Co decided to stage ‘Snow White and the Seven Dwarfs’, the musical.

Directed by Christine Tambimuttu, there was Rita Vedamuttu (who also helped me with my horrible stammer) as Vocal Coach and Maryanne David as Music Coach.

The costumes were designed by Thusitha Jayasundera and the lighting was designed by Steve de la Zilwa.

Snow White was (the wide-eyed teenager) Tracy Holsinger while Andrew David was the Hunter who spared her life.

The Seven Dwarfs were all WWA ‘girls’ – Sonali Pathirana as Grumpy, Simone Christoffelsz as Doc, Candice Morrel her sister as Sneezy, Yasmin as Dopey (and she was a WWA teacher too at that time), Renoza her daughter as Bashful, Gaia as Happy and Manisha as Sleepy.

How I ended up in this production as (a 28 year OLD) Prince Charming I still cannot figure out. I wasn’t even a WWA product. But there I was. Now in retrospect I believe it was ‘Bonsoir’ that might have got me there.

Towards the end of the performance, after that wretched piece of apple got dislodged and she miraculously sprang back to life AND BEFORE they lived happily ever after … Prince Charming had to waltz with Snow White.

Now that was traumatic and hilarious in turn, stepping on each other’s toes and aaaouch, going back to the beginning and doing it all over again only to do the toe stepping aaaouch again. Christine, in exasperation, shortened it I think. So we were all spared.

Now stealing the applause and the limelight and the attention EVERY single night at the Lionel Wendt from under our very noses was the s-p-e-c-t-a-c-u-l-a-r Anthea Peries Flambert as the wicked Step Mother.

Yeah wicked she was and ooozed loads of it during every performance. I remember her running down the aisles onto stage and little children screaming in horror – well that was the other side of SW+da7Ds.

Ebert Wijesinghe (I think it was him) spent hours doing her make-up. She even had a special ‘nose’ made for her when she transformed herself into the apple seller and that took hours to fix on her real nose.

Initial readings and rehearsals were at Anthea’s old upstair residence at the top of Keppetipola Mawatha, Colombo 05, where ‘Perera & Sons’ now stands.

Singing ‘lessons’ were at the David residence at Ramakrishna Road in Wellawatte. They were excruciating at times, especially the lying-down-on-the-floor exercises.

As I now look back three decades, I must add that that was a super experience and one that I do cherish. And so dear Aunty Bundle and Uncle Monty and Christine and Rita and Maryanne … thank you for having me. It was a wonderful experience.

And to the entire cast and crew … it was fabulous working with you all.

PS – AND ON A MORE RIDICULOUS NOTE: I have a terrible weakness for Disney magic and whenever I go to Disneyland Paris and I meet Prince and Snow aimlessly loafing around or doing their late evening number on the float, I mentally tell them … “Huh I was there before you were born”.