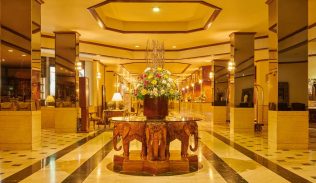 The Galadari Hotel celebrated its 36th birthday last Tuesday 06th October. In the morning were multi-religious ceremonies followed by pirith in the evening, and heel dane the following morning.

General Manager Sampath Siriwardene and team had spared no pains to make this event a meaningful one with religious observances taking pride of place in the current Covid-19 situation Sri Lanka is faced with.

As has always been the custom for the past so many years, bhikkhus from the nearby temple, the Sri Sambuddhaloka Vihara, situated down Lotus Road were invited for pirith and dane.

In his anusasana, the Chief Priest, Ven. Peliyagoda Isurumuniye Pagnalankara Thera recalled the LTTE suicide bomb attack on the World Trade Centre in the morning of October 15th, twenty three years prior, in 1997.

Fifteen people lost their lives in that attack. Among them were the Chief Priest of the Sambuddhaloka Vihara, Ven. Vitharandeniye Thera and seven members of the hotel’s staff. They were all remembered and merit transferred to them.

As I sat there, cross legged on the ground, with Sampath and Surakshi, in the Bougeanvillae room that evening, among the hotel staff and a few well-wishers, my mind went back thirty-four years ago, to my first ever visit to the hotel in 1986 when it was only two years old. I was 24.

It was then known as ‘Le Galadari Meridien’ and had great French panache and flair, being part of the French chain of hotels.

Monsieur Kaspar was the General Manager and Cyraine Illangakoon was his ultra-efficient Secretary. She was efficiency personified.

1986 was the year I joined ‘Bonsoir’, the weekly French television show presented by the Embassy of France in Sri Lanka and telecast over the Independent Television Network (ITN).

Le Galadari Meridien was France itself in the very heart of Colombo in the pre-internet era when Sri Lanka has only two television channels – Rupavahini and ITN, and one radio channel – SLBC.

Mon dieu, French National Day or Bastille Day was a feast at Le Meridien. There was always a French food festival with French music and song and dance.

Adorned with colours of the French national flag – blue, white and red – the lobby came alive each night for a week.

Songstress Dominique Lechat from the charming bohemian Montmartre area in the 18th arrondisement of Paris was a regular feature each year.

Dressed in her glamourous floor-length Parisian skirts which swished about her ankles, she would walk around the lobby pouring out those perennial favourites – Les Feuilles Mortes, La Vie en Rose, La Mer, etc etc and the entire repertoire of songs immortalised by Edith Piaff, Charles Trenet, Josephine Baker, Yves Montand, Charles Aznavour and the likes.

She would sometimes be accompanied by a French accordionist sauntering behind her, with his beret jauntily perched on the edge of his head, to complete the ‘look francais’.

Sri Lankan designers were invited to present fashion shows in the lobby during the food festival.

The ramp began from the upper area, (what is today the Flavours Indian restaurant), and then crossed the central circular area (surrounded by water) across the little bridge into the lobby.

And as the models sashayed down that rather long catwalk in various combinations of these three colours only, it was as though the French tricolore had come to life.

To us it was as though the Bonsoir elephant had come to life. We shared the same colours you know !

It was also around that time that the hotel’s Colombo 2000 nightclub occupied top slot as one of the hottest night spots in town. It was packed night after night with the queue to get in starting from the nightclub’s entrance door and extending all the way to the porch outside.

Security and scrutiny were strict with the burly and moustached Nalaka Colombege in charge.

He was one great, no-nonsense toughie on the outside, the choreographed image he projected when controlling the sometimes unruly crowds, but when you got to know him better, beyond work, his was a warm heart inside. Bless his Soul !

I remember the resident band at that time – ‘Sohan and the X-periments with Estelle’. They reigned supreme on that bandstand. If Sohan and the boys knew how to very successfully read their audiences and charter them on the dance floor right through the night, then Estelle (Claudette) Gunasekera was their perfect champagne toast.

She bubbled and sparkled on stage. It was a visual treat too to watch Estelle on stage as, night after night, animal-like, she gyrated, swaying and moving her body, perfectly, to the beat of the music.

Her bailas were undoubtedly the best at that time. They came from deep down, right from her gut. And oh boy what a performance ! On Friday and Saturday nights the dancing went on till the wee hours of dawn.

It was also during those mid to late 1980s that the young Judy de Silva joined the band. Sohan was intelligent to quickly change the name to ‘Sohan and the X-periments with Estelle and Judy’. His band now had a double barreled offering and that gave it a whole new lease of life.

What is today’s California Grill was then ‘Le Palme d’Or’, the French fine dining restaurant, named after the coveted award, the Golden Palm,  presented each year at the prestigious Cannes Film Festival on the French Riviera.

The chef at Le Meridien at that time was Emile Castillo who graciously welcomed us to his kingdom – the kitchen of Le Palme d’Or.

He was a Cordon Bleu chef (I believe) and had years of experience behind him.

Working with Emile at that time was Anushan Perera, a very talented young dancing chef in his early 20s.

Fresh out of Hotel School, Anushan joined the hotel in 1987 as a Junior Chef.

The young man had a certain flair about him and small wonder he was put to the Palme d’Or kitchen.

“Working with Chef Emile was an experience to last a lifetime”, he says gratefully. “The Palme d’Or was then an exclusive French restaurant which served only French food. Cool live jazz music complemented the ambiance”.

Thirty three years later today, Anushan is now the ‘Emperor’ of the identical location (now the California Grill) where he once learnt his savoir-faire in cuisine under Chef Emile.

And now to continue this story, I reproduce below Chapter 29 titled ‘French cuisine … gourmet’s delight on Bonsoir’ from my book ‘The Bonsoir Diaries’

A greater part of the success of Bonsoir was not only its content, but also the healthy interaction we had with our viewers across the country. Those were the early days of television in Sri Lanka when mobile phones, text messages and live streaming seemed like out of another planet. Our extra communication tools were confined to letters and postcards.

With Le Galadari Meridien one of our sponsors, we hit upon the idea of presenting a monthly component called ‘French Cuisine on Bonsoir’.

Our rendez-vous with French cuisine was early on a Saturday morning when the Palme d’Or fine dining restaurant was empty and we had it all to ourselves. Being the gastronome she is, this was my co-host Yasmin Rajapakse’s speciality. I just tagged along to help in the filming and of course sample the finished product on camera.

Friday nights were heavy with diners and Emile slept in the wee hours of the morning. But there he was up again, early on Saturday for his rendez-vous with Bonsoir. A cold water shower and steaming cups of black coffee, did the trick, we learnt.

Emile had all the ingredients cleaned, cut, chopped and presented in glass bowls which we laboriously filmed one by one. We then had to film the cooking process step by step to make editing easy.

Poor Chintananda Abeysekera had it tough – creeping through tables and chairs, getting entangled in cables and avoiding getting his head hit by hanging pots and pans. Adding to the agony were the steam and vapour blurring the camera lenses, and, his spectacles. He was such a martyr. Or rather we made him one.

And with them, Yasmin took Bonsoir’s viewers on a gastronomic tour through different parts of France and through different genres of cuisine. Among the more popular ones were Ratatouille, Coq-au-Vin, Pot-au-Feu, Cassoulet, Pommes duchesse, and, a whole range of sinful desserts the French are reputed for – Crème Brulee, Profiteroles, Mousse au Chocolat, Mille Feuilles etc

The response we had from the public was fabulous, not only from Colombo but from various parts of Sri Lanka. All they had to do (and which they did) was to send us a self-addressed stamped envelope (SAE) to receive a free copy of the recipe.

We have also had our share of unforgettable moments filming French cuisine. Emile once made a piping hot lamb pie. The crust on top was thick and thus trapped the heat inside. Bonsoir’s cuisine sequence required that Yasmin and I tasted each dish on camera, that we go into visible ecstasy about how d-e-l-i-c-i-e-u-x it tasted and then request viewers to send us the SAE.

After once memorising her lines and not realising that it was burning hot, Yasmin put a generous forkful of the lamb pie into her mouth, scalded her tongue, screamed and spat it all out making Chintananda and his assistant Shelton run helter skelter.

Another incident was when I purposely led the pious, non-beef eating Chintananda on to taste a veal vol-au-vent. In all naivété, at that time he didn’t know what veal was. Half way through when I told him what it was, he turned green in his face and sprang into the air and spat it all out, on himself, on our camera and on all of us around him. Aaaah the delights of French cuisine indeed !!!  (End of Chapter from The Bonsoir Diaries)

That evening after pirith as we sat to dinner, Surakshi and Sampath Siriwardene (both great conversationalists) and Richard Balasuriya, it was a long trip down Memory Lane.

Richard is the Chairman / Managing Director of the celebrated and well patronised Japanese Restaurant Ginza Hohsen which is now housed at the Galadari Hotel.

Sampath has presided over the Galadari as its General Manager for the past 17 years and has a plethora of interesting stories and anecdotes from his 45 years as a hotelier. He regaled us late into the night.

And for his charming wife Surakshi, she was only too delighted to pose with and say Bonjour to CharlesLeFrog my alter-ego and companion.