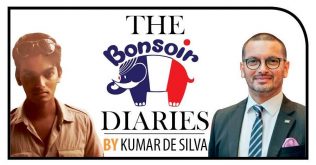 Today, Tuesday 05 January 2021, I celebrate thirty five years on television. It was on this day, in 1986, that I first appeared on the little screen, on Bonsoir, on ITN.

What a journey it has been, over the years, across hundreds of editions of Bonsoir and all the other wide and varied TV shows I have hosted … to social media today, to ‘Aperitifs with Kumar’ on Pulse (www.pulse.lk)

And as I look back on that journey, I remember with deep gratitude, all those persons both in Sri Lanka and in France, too numerous to single out, who have been a part of that exhilarating voyage with me.

Today 35 years later, if I were to single out any one specific facet of that journey which changed my life AND for which I still thank Bonsoir and the Alliance Francaise and ITN and the Embassy of France in Sri Lanka … it would be for giving a new lease of life to the stammerer in me.

If Nanda Jayamanne had not given me the unheard of luxury of nine successive screen tests, eight of which I failed and managed to barely scrape through the ninth … I would have been a clerk at the Water Resources Board (the parallel letter of appointment I had) … these words would not have been written … the ‘Bonsoir Diaries’ would never have happened.

In celebration of this 35th anniversary, I’m happy that ‘The Morning’ newspaper has begun to serialise the fifty chapters of the (now sold out) ‘Bonsoir Diaries’ every Tuesday, commencing today. See link below :

It died in December 2010 after an eventful, twenty five year journey through Sri Lankan television.

This book deals with its first fifteen years, of which I was a part, and which are fondly referred to as the “belle époque” (glorious era) … from the early days of television in Sri Lanka … to the arrival of the internet and social media.

A few years ago, I found out, much to my great disappointment and dismay, that the Bonsoir Archives do not exist, and for reasons beyond my comprehension. This was devastating! Years of hard work, just vanished into thin air!

It was then that young Dilshan Boange (fellow Wesleyite and the Bonsoir Boy after me) whom Malinda Seneviratne very succinctly calls an agent provocateur, called me up with a proposition.

“Why don’t you”, he asked, “in the absence of the Bonsoir archives, write a series of articles on the Bonsoir story?”  I wasn’t interested and could not be bothered.

“Who would be interested in publishing them, and worse still, who on earth would want to read them?”, I retorted in annoyance and shrugged him off.

He persisted, much to my great irritation. Without my knowledge he had asked Malinda Seneviratne, the Editor of the Nation who agreed instantly. I was surprised.

That’s how the Bonsoir Diaries made its debut as a column in The Nation through 2012.

As I sat down to write this story, I had neither a beginning nor an end. I just had an incoherent and disjointed trickle of memory which silently flowed through my fingers, across the keyboard and into the hard drive of my computer.

Days passed and the trickle soon became a gush which flowed steadily. Weeks passed as the flow became a flood and then a virtual avalanche. It all came back in a massive self-induced catharsis. There was no turning back, if I may be permitted the use of that terrible cliché.

Malinda gave me a maximum limit of 500 words. At the beginning I abided although I had more to say. As time went on I abandoned the limit and discreetly went up to 700 at times. He never knew. He was too busy to check. That’s what I still like to believe.

The response was encouraging. Bonsoir slowly seemed to be getting a second, yet temporary, lease of life. The column rapidly became a catalyst and inter-connected former friends and fans of Bonsoir.

Funnily, there were anonymous brickbats too, from those who felt I hadn’t the right to write about Bonsoir. I wasn’t the least bit surprised. But then, any right thinking individual does not respond to such cowardice. Malinda didn’t. Nor did I!

As the column neared its pre-determined end in December, Dilshan galvanised into action and once again took on the role of agent provocateur.

This time he approached Ranjith Samaranayake, Chairman of the Expographic Group (https://www.expo-graphic.com) and literally sold him the idea of ‘The Bonsoir Diaries’; “expanded, elaborated, enriched and in book form, with lots of photographs too”. Ranjith, whom I barely knew, agreed instantly. It surprised me more … and that’s how this project got off the ground.

These fifty chapters unravel much of the intrigue we revelled in, the make-believe we loved to create and the innumerable faux-pas we’ve tripped on. All that and more constitute the fabric of Bonsoir.

I lay claim neither to a literary masterpiece, nor to a self-proclaimed work of art. This is simply a factual (yes, and coloured at times) personal record of my work with my first-ever television show, the one which launched my career and opened countless doors in both my personal and professional life. All this and more I gratefully owe to Bonsoir.

In the absence, sadly, of what should really have been the Bonsoir Archives, I modestly believe this book – ‘The Bonsoir Diaries’ – will in some way, fill that void.

To all those of you who have seen ‘Bonsoir’ at some stage of your lives, all I can say is … let these words spark your memory …

To those of you who have not seen ‘Bonsoir’ …. all I can say is … let these words fire your imagination …

(An edited version of this text appears in ‘The Morning’ of 05 January 2021. See link at beginning of this text)

NEXT WEEK – Chapter 01 : A diplomatic ‘birth’ and the journey begins …