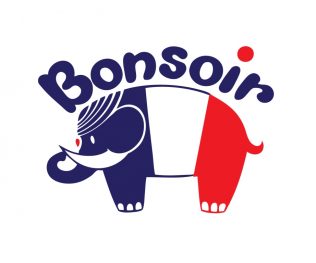 This year I celebrate 35 years on ‘Bonsoir’ and on Sri Lankan television.

Bonsoir closed down in 2010 and in the absence of an archives is ‘Bonsoir Diaries’, the behind-the-scenes stories I wrote in 2013.

The book is a cocktail of chapters, bursting at their seams with pithy asides, a trail of faux-pas, tit-bits from behind-the-scenes marinated with anecdotes and drizzled with nostalgia, revealing everything you never saw on your favourite television show … from the 80s through the 90s into 2000.

In celebration of my 35 years on ‘Bonsoir’ and Sri Lankan television this year, ‘The Morning’ newspaper serialises the fifty chapters of the (now sold out) ‘Bonsoir Diaries’ every Tuesday.

Bonsoir was born in July 1985, somewhere around the time of Bastille Day (French National Day 14 July) and exactly 196 years after the French Revolution to be precise. It had four architects – two French and two Sri Lankan. I prefer to call them God Parents.

The idea was initially conceived by Madame Josiane Thureau who was, at that time, in charge of radio and television educational programmes and audio-visual training, at the French Ministry of Foreign Affairs in Paris.

She perceived a ‘window to France’ (une vitrine française) on Sri Lankan television. I’m still unable to fathom why she thought of Sri Lanka of all places on earth.

Sri Lanka was not a far flung outpost of the French Empire, and, fate or fortune (whichever you wish to opt for) had it that we escaped being colonised by the French during the time of King Rajasinghe (I’m told). But Madame Thureau, in 1985, was convinced that such an idea would take fruition in this country, and, that it would be successful. Many years down the line she was proved right.

Then followed a flurry of diplomatic courier between Paris and Colombo, with Monsieur Bernard Prunières, Cultural Affairs Counsellor at the Embassy of France in Sri Lanka at that time. Prunièeres was from the old school, a very refined and cultured man. He hit upon the idea instantly.

It had the charismatic and multi-dimensional Anthea Peries Flambert (pronounced flambé) on board, as a news reader and also hosting the popular ‘News & Views’ programme in her charming and  inimitable style. This was a very popular programme and attracted thousands of Anglophone viewers.

There were also Bevil Palihawadana, Jeanne Abeywickrema, Rizani Aziz, Noeline Honter, Ayesha Gunasekera and Leo Belleth, among others, hosting musical programmes such as ‘Musical Showcase’, ‘Bright and Breezy’, ‘Variety Fare’ and also ‘Fan Club’ (which I later had the good fortune of hosting for nearly 15 years).

There was no turning back from that point onwards. Then arose the all important question of funding. This wasn’t a problem since most of the French companies operating in Sri Lanka came forward in a show of support and solidarity to their patrimoine française.

After all Bonsoir was to be about France and (initially) everything French. Among them were UTA French Airlines, Le Galadari Meridien, Banque Indo-Suez, CGE Alsthom, CGM, Alcatel, Degrémont, Gersar whose patronage Bonsoir enjoyed, and with whom Bonsoir had a very cordial and fruitful relationship for many, many years.

Bernard Prunières, in turn, conferred with his good friend Mr. Thevis Guruge, ITN’s then Competent Authority. Being the far-thinking and pro-active media man he was, Guruge thought it to be a good idea and conferred with his erstwhile Manager Programmes Mrs. Nanda Jayamanne (the veteran broadcaster) and responded, literally overnight, with a positive ‘Yes’.

It went a step further, and featured Sri Lankans and Sri Lankan events, all of whom and which had some kind of link with France – there was the francophone Chandrika Bandaranaike Kumaratunga who had lived and studied in France.

There were also Ceylon’s first-ever Chargé d’Affaires to France Dr. Vernon Mendis, there was Dr. Lester James Peries who had taken ‘Rekawa’ to the 1956 Cannes Film Festival and there was also the francophone Sumitra Peries, Sri Lanka’s Ambassador to France and UNESCO.

There were Aluth Avurudhu and Vesak celebrations at the Buddhist Temple in Le Bourget headed by Ven. Paravahera Chandraratana Thera, Chief Sangha Nayake of France. The Ambatale Water Treatment Plant was done with French aid and Bonsoir thus dedicated an entire programme to this massive Franco-Sri Lankan project with, I remember, detailed emphasis on the entire water treatment process it entailed, flocculation et al.

When the Sri Lanka Survey Department linked up with France’s SPOT satellite, we spent an entire 9-5 working day at Narahenpita on a special programme. Scientific research meant linking with up with the Institut Pasteur in Paris. The list goes on.

Bonsoir was to be a fine example of a healthy and fruitful co-operation between the French Foreign Ministry, the French Embassy in Colombo and ITN. This was the pre-internet, pre-mobile phone, pre-computer and pre-cable TV era. Apart from the radio, and television which was still in its relative formative stage, social media entertainment was non-existent. We thus had a very captive television audience during those early years.

Now, in retrospect, and judging by the feedback we got, Bonsoir, I believe, did enrich the local viewing experience and successfully played its pre-determined 360° role of bringing France into Sri Lankan sitting rooms

PS : Why Bonsoir for the title of a television programme ? Don’t ask me! ‘Bonsoir’ means ‘Good Evening’ in French and the founders might have thought it appropriate.