Home / General / GYPSY TALES : Chapter 05 – My playmates the juniorists at St. Joseph’s Seminary across the fence. 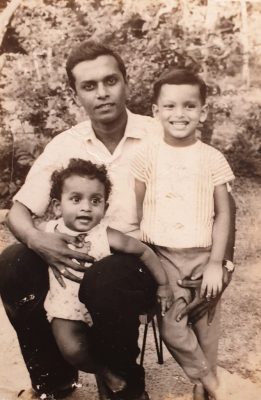 I’m told that I had been a precocious child. It only worsened with age.

This might probably also have been, because until my little brother was of an understanding age, my ‘playmates’ were generally an easy fifteen years older than me.

There were the Perera ‘children’ (in their early twenties) at the top of Green Path, Kohuwala and then there were the numerous ‘juniorists’ or ‘seminarians’ at the St. Joseph’s OMI Seminary just across the fence.

Way back in 1966, as a four year old child, going to the Seminary was like going to some faraway place in a distant land. It was a long walk for my little feet.

As we trundled down the little lane (fringed with a profusion of crotons of various varieties) which turned off Green Path and as we stood at the main gate, the grounds majestically rolled down and away … as far as my little eyes could see.

Far away in the centre was the main building like a large old English ‘castle’ (disappointingly minus the moat, the drawbridge and the turrets).

On the right hand side was the rock grotto beyond which were the basketball courts and the swimming pool way beyond. On the left hand side there was nothing but grass and the football grounds.

There was more grass which extended right up to the boundary fence that ran right down Green Path over which one could see our house.

This visual from the main gate was like out of a storybook.

It was sylvan and verdant and even more beautiful during the rainy season when new leaves pushed forth.

The Rector in charge at that time was Fr. Andrew Peter Fernando. He hailed from Kurana in Negombo.

Bespectacled, he was tall and dark and had a very kindly voice. He was Daddy’s friend. They used to chat as I played outside.

Whenever we went ‘visiting’ in the evenings, he would put his hand into a large glass bottle (full of sweets) on his table and give me two. Sometimes three, but never one.

I later learnt that Fr. Andrew Peter had very generously contributed from his own funds towards the construction of the basketball courts. Such was his calibre!

I’m told that I had been an “insufferable, incurable, inquisitive chatterbox” even at that time. (This came in good stead in later years in my professional life too). And so I made great friends with the aiyyas who showed me around.

My induction into the world of the St. Joseph’s OMI Seminary was at the grotto. It was calm and peaceful.

The Virgin Mary was beautiful and serene. However I could never understand why these aiyyas worshipped Jesus’s Mother and not Jesus himself.

They even had beads (which I later learnt was called the Rosary) in their hands as they prayed. That confused me more.

At home we had a little red glass oil lamp with a floating wick (from the little shop at All Saints’ Church, Borella) and prayed to Jesus and not to his mother. Baffled I well and truly was.

However much they tried to explain to me, I failed to understand. How could a little brat understand that the Protestant Church came long after the Catholic Church and then the Henry VIII story et al.

Permit me to deviate here ……

I vividly remember a December 24thevening, about a decade ago in Paris.

I had walked the whole day, in the biting cold, taking in the sights and sounds of the city I love so much.

At about 5.00 pm, near Notre Dame Cathedral, my legs were stiff and my feet literally frozen.

I could walk no more. I hobbled in to the cathedral and sank into the closest pew.  Dead. Exhausted.

The mass was being sung in Latin. I heard the soft hush of prayer. The aroma of melting candles drifted up my nostrils.

And the choir sang. It was almost as though paradise had come down to earth.

A few years later that experience inspired me to pay tribute to Notre Dame de Paris in black and white. Please see link below.

Back on track and back to St. Joseph’s OMI Seminary …

The vast expanse of gardens had numerous trees such as jambu, uguressa, jak, mango and various kinds of berries on which nested birds such as mynahs, parrots, crows, bats etc. When the trees bore fruit, it was the birds who had a banquet. We mortals below had to content with whatever remained.

If I remember right, they had their own ‘keera kotuwa’ too in which they grew different kinds of “palaa waraga”. The Seminary did have its minor staff. Juan Baappa was one of them. But the boys had to chip in too with physical work. It was called ‘gardening’ and part of their daily routine.

I was told that the boys were also assigned their own gardening plots and got marks for ‘performance’. These marks were added to the overall score at the annual sports meet.

Ah yes there were two houses at that time – Mazenod and Albini – and the march past at the sports meet was a treat to watch as “marched past” they did and with military precision.

The swimming pool was another popular gathering place, understandably very wet and noisy too. The tiles were light blue and the whole place smelt of urine. Yes urine !!!

I had whined and complained to Mummy who had told me of the existence of a thing called ‘chlorine’. How was I to know the difference and more so when You-rine kind of rhymed with Chlo-rine.

The aiyyas had apparently very unsuccessfully tried to teach me swimming. I loved the water but could not put my head into or under it.

I had once almost drowned in the shallow end and never put a toe into that strong smelling pool ever again. That pool is there even to this day.

In later years I tried many times to learn swimming but failed. My head has to be above and never under water.

Even to this day I shamelessly hang around in the shallow end where I am physically and psychologically ‘safe’.

The seminary had chickens and love birds. There were two dogs too at that time. One was Billy. He was Fr. Adrien Joseph’s pet.

The other was a Sri Lankan female dog whose politically incorrect name I don’t wish to mention here.

Ahhhhh the p-i-g-g-e-r-y ! My favourite spot. There were pigs and baby pigs, grunting, barking, snorting, falling over each other. It stank to high heaven. But then ‘stank’ is the wrong word. It was an aroma. It never bothered me. I actually enjoyed it on the contrary.

Feeding time was the best. As soon as they sensed the food coming, what a brouhaha it was. And when their grub was poured into the trough, it was joyous pandemonium.

The bigger ones jumped over each other. The smaller ones got squashed and squealed to high heaven. This was my entertainment and I loved every minute of it.

Kohuwala, at that time, was quite a ‘village’, very provincial, in comparison to today. There were box hedges and fences (with and without barbed wire) and no parapet walls.

One evening as we were playing, there hopped in a rabbit from God knows where. The dogs saw ‘live dinner’ and, in the flash of an eyelid, as though possessed, chased it across the grounds towards the grotto.

The poor rabbit leapt and hopped with all its might. I was traumatised. Little moi ran after the dogs to save the rabbit – not to be confused with “running with the hares and hunting with the hounds”.

I screamed at the dogs who in turn snarled at me. Just as it reached the grotto, the poor rabbit collapsed on all fours out of absolute exhaustion. It was a long run. The rest was a horrific mangled bloody mess. I never looked at those dogs ever again.

When we finally left Green Path and went to say our goodbyes to Fr. Andrew Peter Fernando and my playmates, the dogs were there wagging their tails. Daddy and Mummy patted their heads. I walked off in a huff.

NOTE 01: Life is strange and co-incidental. After half a century I’m back again in Kohuwala. St Joseph’s Seminary is now to me an Election (Voting) Centre. The former football grounds and ‘grass fields’ adjoining Green Path are now the ‘Marion Grove’, a retirement home for the Oblate Fathers.

THANK YOU – To the many OMI fathers and some of the juniorists of then, with whom I connected and who generously help fill in all the blanks.