Home / General / THE BONSOIR DIARIES – Chapter 05 – Yasmin Rajapakse on board ! 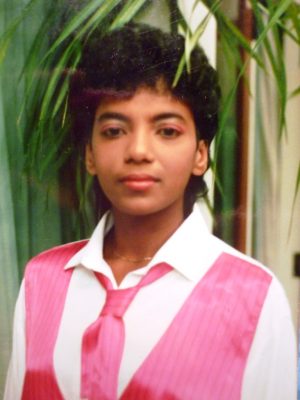 It was no fun at all hosting Bonsoir alone. I often felt like an abandoned orphan. It was boring. I needed a vigorous thrust and parry. The French Embassy was thus on the look out for a ‘suitable’ female co-host. The candidate didn’t have to have television experience BUT had to speak fluent French. The search was on … many hopeful probables were interviewed … but no one fitted the bill.

Finally one day I was told that the ‘Bonsoir Girl’ had been found. I was jubilant. In walked Yasmin Rajapakse, the dusky, curly-haired lady whom I had very briefly met, and barely spoken to, at the Alliance Francaise at Ward Place.

She was the perfect foil. She was variably crazy, rather nutty and ‘tres expérimentale’. Like me, she too had absolutely no experience in television. This was March 1986. She worked with us every morning, sharing her time between Eric Rajapakse Opticians, the family business, and her two little children Nadeera (10) and Rajeev (07). The kids often came to our studio after school (Royal College and Bishop’s College) and joined their mother who took them home with old Serasinghe the chauffeur at the wheel.

Yasmin is now the Chairperson of Eric Rajapakse Opticians while Rajeev, a star class tennis player in his own right, ably runs the family business, assisted by his sister who is married and domiciled in Paris.

Down the years Yasmin and I have had loads of misgivings. We’ve had volatile arguments. There were times when we didn’t speak to each other for days (although we were compelled to do so, on-camera). We agreed to disagree and vice-versa and got on like a house on fire which even the fire brigade boys couldn’t put down at times.

Now in retrospect I believe it was the Francophone and Francophile in us, and our deep and abiding passion for Bonsoir that drove this programme to the heights it reached. The fact that we both read and spoke French, and had been to France, also gave Bonsoir its ‘first-hand experience’. We didn’t need to work through translators and intermediaries. Working with Yasmin was exhilarating and great fun indeed. I did enjoy every moment of it.

After three months of Bonsoir, I happily took off to Paree on a six-month training course in television production and presentation. This was one of the most enjoyable periods of my life. Prior to leaving, I “taught” her the microscopic bit I knew about production and presentation. Yasmin was a quick learner, but rather obstinate too. So poor Yasmin was left to figure out the balance for herself and carry on single-handed until autumn that year.

Just as I did, she too had to trek it all the way to ITN with scripts and cassettes. Yasmin was never one for make-up and decoration. She believed in simplicity to a point of austerity. She often refused to be made-up, much to make-up guy K.D. Siripala’s dismay. To him it was a pre-requisite. To her it was totally redundant and a source of constant irritation. Siri had the final say while Yasmin fussed and grumbled.

Customised backdrops were a relative rarity and a luxury those days. The easiest way out was to super-impose the presenter on a video background. This was/is called ‘chroma key’. The presenter was filmed (or ‘shot’ as one calls it in television jargon) against a blue curtain and then superimposed on a chosen image. Yasmin had very curly hair at that time and somehow those stubborn little curly ends refused to be chroma-keyed. That was when Siripala, without blinking an eyelid, reached out for his scissors to nip off her curls. Yasmin had freaked out, I later heard.

I don’t know what transpired between them, but it was this that speedily (and fortuitously too) led to the birth of our very own Bonsoir Studio at the French Embassy in Rosmead Place. Merci Yasmin !