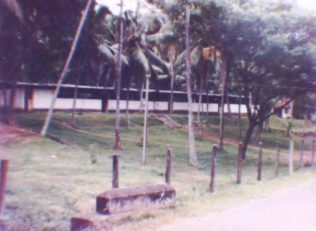 This looks like a rundown animal shelter in some farm deep in the countryside. Sorry you’re wrong. This is Polwatte and this was the Department of English of the University of Kelaniya. This was home to me for four full years, from August 1981 to July 1985.

Our part of Polwatte was semi-verdant terrain that periodically stank of bullshit. There was also cow shit and cat shit and dog shit, and if we were really unlucky, random goat shit too.

After the rains this buffet of shits turned mushy and runny, like mousse au chocolat, in texture and colour, and that’s a totally different story. Let me now elaborate !

This elongated building with its half brick / half mesh walls housed three lecture rooms, one staff room, a small and congested room for the Head of Department and a disgustingly miserable ‘toilet’.

Polwatte was still ‘gama’ (village) at that time in the early 1980s. The village dogs thought the University was theirs and roamed about in gay (no pun sorry) abandon.

When mating was on in full heat, the poor, much abused, village bitch would, at times, come fleeing into our lecture rooms followed by a fully charged gang of the opposite sex.

And there she would be violently abused all over again right in front of our eyes, we who were trying to digest Pope or Chaucer with the greatest difficulty.

It was mayhem when the poor thing sought refuge under our chairs and the dogs followed and the girls turned hysterical and shrieked, some wailing, more in deep embarrassment than in fear.

The rainy season was a challenging one. When the monsoon came down with full force and battered the takarang (tin) roof with all its might, the din was worse than a cat on a hot tin roof.

The wind was capricious. It changed course and turned horizontal and when the rains blew in through the half mesh walls, our only protection was to get to middle of the room and build a barricade of open umbrellas around us.

On other days when the sun was at its peak and generously smiled upon our takarang roof, we roasted beneath, and that too on a full stomach after lunch and trying to parallelly digest Donne or Marlow.

These were the very colourful and terribly challenging circumstances under which my 40 odd batch mates and I read for our degree – General or Special.

Yes our batch was 40 strong and we came from all over Sri Lanka. We came from different socio-economic backgrounds, ethnicities and religions. But that takarang roof levelled us all.

The majority “came in the ship” while a few others “came in the boat”. ‘Nawen enawa’is the first intake which came on full steam merit. ‘Boat-tuwen enawa’ was the second intake, taken in to fill any vacancies.

There was tangible condescension on the part of the ‘ship ones’ when they encountered the ‘boat ones’, but that was mainly across the general university student populace and not quite in the Department of English. After the first vacation, that too vapourised.

I have always believed that ours was a unique batch in the history of that Department. We were 40 strong for starters.

And then exactly half the batch was right-handed while the other exact half was left-handed. I belong/ed to the latter and still pride myself in it. Never in my life have I seen such a large gathering of left-handers.

And then, this unique batch had 38 girls and only 02 boys – myself and this boy from S. Thomas College, Mt Lavinia.

Within two weeks of entering University, he got ‘hitched’ to a gorgeous Visakhian and they were in their own orbit for the next successive years.

It is now 39 years since we all entered University that July in 1981. We are all now spread across Sri Lanka and the world and have moved on in life. Life has alternately been both kind and unkind to us but we journey on.

Today thirty-five years after graduating, what I treasure most is the human experience I gained during those four years. We called it the University of Kelaniya.

To me it was also the University of Life … which gave me solid, close and dependable friends. I count them on the fingers of one hand.

We met when were teenagers, just out of school, in a world bereft of social media. Forty years is a long time indeed. We’re now nearing our sixties and are still each other’s soul mates.

“Friendship is the hardest thing in the world to explain. It’s not something you learn in school. But if you haven’t learned the meaning of friendship, you really haven’t learned anything.” – Muhammad Ali

NOTE: I visited Polwatte early this year, on work. And I was not surprised to find the once green terrain replaced by one massive concrete mess. There was only just one old tree which i recognised along the old path which took us from the toilet to the side of the library. But there were dogs. Yes there were dogs … great grand children of the ones who entertained us I deduced.