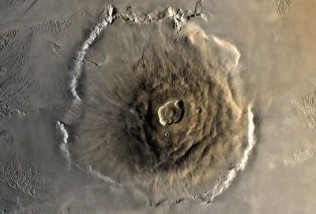 Earlier this week, the scientists running NASA’s Curiosity rover announced the mission’s latest finding: evidence of an ancient Martian lake that appears to have formed over the course of millions of years and has since dried up.

Naturally, this has a lot of people asking the obvious question: Was Mars once home to alien life?

This is a difficult question, and one that scientists still don’t have a full answer to. But by collecting more and more data with Curiosity and other probes, they’re getting a better idea of what Mars looked like billions of years ago.

Layers of sedimentary rock in Gale Crater photographed by Curiosity, which serve as evidence of an ancient lakebed. (NASA/JPL-Caltech/MSSS)

NASA intentionally landed the rover a few miles away from a huge depression called Gale Crater. It was chosen as Curiosity’s primary destination because of a giant 18,000-foot mountain at its center — nicknamed Mount Sharp — that appeared to be made out of sedimentary rock layers. On Earth, sedimentary rocks usually form as a result of water movement.

gale crater may have once been a lake

After more than two years on Mars, Curiosity has reached the foot Mount Sharp, and photos that the rover has taken confirm the idea that the mountain is sedimentary. What’s more, NASA scientists think they now understood how Mount Sharp formed.

They believe that Gale Crater was once a lake, and that rivers once flowed in to the lake, carrying bits of sediment and depositing them in layers, gradually forming rock — just as sedimentary rocks typically form on Earth. Over time, the lake appears to have repeatedly filled, then evaporated away, then filled again, depositing new layers of sand and silt each time.

Later on, wind erosion seems to have helped carve out the rock layers. Eventually, this revealed the original lakebed (Gale Crater) with an exposed rock structure at its center: Mount Sharp.

Olympus Mons, an ancient volcano on Mars that may have contributed to the planet’s warmer temperature. (NASA/JPL)

Curiosity has previously found evidence that Mars was once home to liquid water. Soon after its 2012 landing, for instance, it found rounded rocks that appear to have resulted from erosion due to flowing water.

But Mars isn’t warm enough for liquid water to exist today — all its surface water appears to be locked in its polar ice caps. For scientists, this has created a mystery: why would Mars have been warmer long ago?

Some speculate that ancient volcanic activity and a thicker atmosphere could have warmed the planet up, but only for very brief periods of time — perhaps as short as a few years. This could explain the evidence of ancient streams, but also make it seem very unlikely that Mars could have ever evolved life.

The new evidence of a lake is a big deal because it upends this theory: the lakebed and other evidence collected by Curiosity indicate that Mars was warm enough for liquid water for a much longer period, perhaps millions or tens of millions of years.

Furthermore, NASA climate models suggest that, in order to maintain water flow, Mars likely had a large ocean in its northern hemisphere — the sort of giant body of standing water that seems most likely to allow life to evolve.

So does the lake mean there was once life on Mars?

If the lake finding is correct, it means that Mars was once sufficiently warm to evolve life as we know it. But that’s not the only condition necessary for life. On Earth, at least, all organisms are made up of organic compounds — carbon atoms bonded with other elements that serve as the basic building blocks of life.

warmth isn’t the only condition necessary for life

And it’s not yet certain that these compounds exist on Mars. In 2012, Curiosity did report finding some simple organic compounds, but it was unclear if they actually originated on Mars or had been carried there on the rover itself. On December 14, NASA is holding another press conference to discuss “new information” about organics on Mars, but one researcher involved told the New York Times that the 2012 finding has essentially stayed the same: they believe there’s a “good chance” the organics are actually Martian, but they still don’t know for sure.

Additionally, even if you had liquid water, organic compounds, and enough energy and time, it’s still far from certain that life would evolve.

It took roughly a billion years for life to evolve on Earth, and for all we know, that may have been a singular accident — an exceedingly unlikely event that happened to occur against all odds. Or it could be a predictable event that happens whenever conditions are right.

At the moment, we just don’t know. When studying the evolution of life, our sample size is one.

Not directly. Curiosity is equipped with all sorts of instruments to study Mars’ geology, atmosphere, and climate, but it doesn’t have a device that directly searches for life — say, by looking for fossils or metabolic byproducts. That’s largely because we don’t yet know enough to know what we’d be looking for.

However, in the coming years, Curiosity will gradually ascend Mount Sharp, taking rock samples and analyzing them. Because the mountain’s rock layers were put down over the course of about two billion years, they could serve as a detailed record of Mars’ ancient atmosphere.

If Gale Crater truly was a lake, then at some point, Mars shifted from a relatively warm, wet, Earth-like planet to the cold, dry planet we see today. Studying the samples could tell researchers exactly how that transition occurred — providing further clues about early Mars, and how likely it may have been to evolve life.

Will we ever find evidence of life on Mars?

Scientists certainly hope so. In 2020, NASA plans to send another mission to Mars. This new rover will look a lot like Curiosity, but will have more advanced instruments and a different goal: collecting and storing rock samples that are most likely to have evidence of ancient life.

The idea is that the 2020 rover would cache these samples, and then at an unspecified future date, NASA would launch a follow-up mission to gather the samples and bring them back to Earth. That would allow scientists to study them in much more detail — perhaps finding evidence of Martian life.

However, at this point, that plan is far from a reality. NASA hasn’t committed to the sample-return mission, in part because we still haven’t developed the technology to launch a rocket from Mars. At the moment, the most we can do is study data sent back by Curiosity and other probes — and learn as much as possible about ancient Mars.