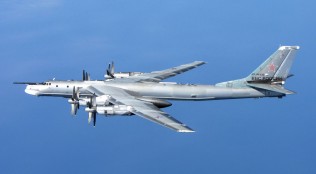 Two Russian bombers, flying with their transponders turned off to avoid detection, swooped so close to the Irish coast that Dublin’s control tower delayed the takeoff of one passenger plane and ordered another to alter its route to steer clear of the bombers. The Feb. 18 incident, disclosed last week by the Irish government, was only the latest in an alarming series of close calls with Russian warplanes in the skies over Europe.

In December, a Russian military intelligence plane nearly collided with an SAS passenger jet over southern Sweden, according to the Swedish air force chief. Earlier in the year, a Russian plane flew close to another SAS jet that had just taken off from Copenhagen. Russia has denied that its aircraft were dangerously close to either plane.

Over the past year, Russian military aircraft have probed and sometimes violated the borders of European nations’ airspace more than 100 times, according to NATO. In most of these instances the Russians have turned off their transponders, electronic devices that commercial jets are required to use to make it easy to track them. Operating without the devices, known as “flying dark,” poses a serious risk to civilian air traffic, NATO Secretary General Jens Stoltenberg said at a press conference in December.

So can anybody make the Russians turn those transponders on before there’s a disaster? The European Union’s air safety agency has been asked to deliver a report, due by the end of this month, on how to address the problem. Finland, one of the countries that’s been buzzed by Russian planes, has asked the United Nations International Civil Aviation Organization (ICAO) to look into the situation as well.

There doesn’t seem to be much the Europeans can do. The Convention on International Civil Aviation, which sets the ground rules for air travel worldwide, does not “cover the operation of equipment on military aircraft,” according to a spokesman for the Montreal-based ICAO. The Russian military isn’t bound to obey EU rules, either.

Russia’s air maneuvers are upsetting an unwritten agreement, in place since the end of the Cold War, that military planes will generally use transponders when flying near civilian air corridors. Even in international airspace, it’s “standard practice” for NATO and other Western air forces to keep their transponders on, except on combat or intelligence missions, says Justin Bronk, a military analyst at the Royal United Services Institute in London. “Flying around with your transponder off in broad daylight is a deliberate provocation.”

Even without transponders, the Russian planes can still be seen on radar. And while radar provides less-detailed information than a transponder signal would, some Russian aircraft are easy to identify. The Tu-95 bombers that approached Ireland “are extremely obvious on radar,” Bronk says. “They’re old, they have huge wings and propellers.” Because NATO members share their radar data, it’s likely that alliance members had been tracking the planes long before they neared Ireland. (Ireland isn’t a NATO member and doesn’t have an air force, so Britain scrambled fighter jets to shadow the planes.)

The situation around the Baltic Sea looks scarier. Fighter jets taking off from an air base in the Russian enclave of Kaliningrad can reach the airspace of Sweden or the Baltic states of Lithuania, Latvia, and Estonia within minutes, leaving little time for air traffic controllers to respond. Besides the two close calls with SAS planes, a Russian jet came within 10 meters of a Swedish surveillance plane flying in the area last summer. Also last summer, an American surveillance plane conducting operations near Kaliningrad was chased into Swedish airspace after being approached by Russian fighters, according to a report last fall by the London-based European Leadership Network, a group of former diplomats and political leaders.

Bronk says the best solution, for now, is deterrence. “You keep a large force of armed fighter jets” on duty round-the-clock, he says, “with a very clear policy that if you enter our airspace, you’ll be shot down.”