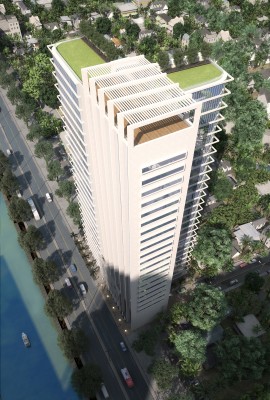 The Renuka Tower will be a modern 28 storey tower providing ‘A’ grade office facilities built on company owned land at Galle Face Terrace and Uttrananda Mawatha, Colombo 03. Once completed, the tower will have 200,000 sq. ft. of rentable office space and parking for more than 200 cars. The tower will also have corporate entertainment areas, conference facilities, dining, recreation and all the modern necessities required to create a pleasant and safe working environment.

Renuka Holdings PLC is a diversified conglomerate listed on the Colombo Stock Exchange (CSE) and is the holding company for subsidiaries engaged in Agri Food Exports (Plantations, Manufacturing, Global Marketing), Dairy, FMCG, Automotive plus Investment and Services. Property development has been a long term vision of the company as it has land parcels in key locations around the commercial zone and the central business district of Colombo.

Adding further insights into the project Executive Director, Shamindra Rajiyah said “We believe the time is right for us to develop our land bank and create a new revenue stream for the company from these resources. The group already has in operation the Renuka Building in Colombo 08, an eight storey 66,000 sq ft office complex housing group subsidiaries and many reputed tenants. Using our past experience, we aim to make the Renuka Tower a preferred business address in the city”.

The circular sent to shareholders further stated, “The project will be carried out in two stages and currently planning and conceptualising of the development have been completed. Renuka believes that the expected growth trajectory of Sri Lanka’s economy, and its increasing integration with the rest of the world via its hub status will result in a lack of high quality office space within the central business district over the next three to five years, as such, the construction of class ‘A’ office spaces is expected to generate an attractive rental yield for the company”.

The total project cost of the two stage development is estimated at Rs 3.2 Bn which will be partly financed by the ongoing rights issue of Rs 1.03 Bn.  The company is offering a total of 44,517,313 ordinary voting shares at Rs. 21 each and 6,428,415 million non-voting shares at Rs. 15 each to be issued. The project is expected to begin in the year 2015 and is planned for completion in the year 2018.

Renuka Holdings PLCs’ recently released  six months results reported a turnover of Rs 3.85 Bn and a Gross profit of Rs 899.5 million, an increase of 21% over the corresponding period last year. The group recorded a profit for the period of Rs. 315.8 million for the six months and profit growth was seen across all six sectors the group operates in.  Total assets as at 30th September 2014 stood at Rs 5.3 Bn and attributable to shareholders at Rs 3.0 Bn. Nett asset value per share was Rs. 58.90.