Colombo. 09 March 2016. French Ambassador to Sri Lanka Jean-Marin Schuh and German Ambassador Juergen Morhard are taking part in the traditional Cannonball run celebrated by Colombo’s 150 year old Galle Face Hotel, which will be held this year on the 18th of March 2016. The Cannonball run is an annual tradition celebrated on the Galle Face Green, to commemorate the extraordinary incident of a cannon misfire by a member of the British Artillery  in 1845.

The 30-pound cannon had misfired during a practice session around the southern ramparts of the Colombo Fort, crashing through the roof of the now Galle Face Hotel, leaving a heavy dent on the drawing room floor where it came to rest under a chair. The cannon ball is at present preserved in the museum located in the South Wing of the hotel. 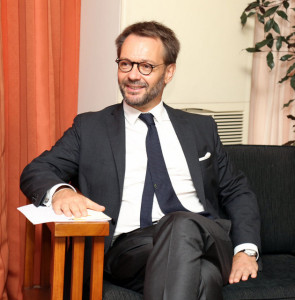 This year’s Master of the Cannon is none other than the Galle Face Hotel Chairman, Mr. Sanjeev Gardiner. Pomp and pageantry accompany this special event – showcasing a procession of runners, cannonball bearers, and flag bearers. Members of the diplomatic community, the corporate, those in the field of entertainment, sports personalities, members of the media, the glitterati and the literati are in attendance to enjoy and witness this event. Cocktails and canapes at the terrace to end the evening make this possibly the best historic event of the year in Colombo.

“We promise it will be a historic and great event. The hotel since its beginnings in 1864 has been romanticised as a heritage landmark for many years. However, rather than being rooted in the past we have instead endeavoured to embrace and celebrate its rich history with events such as these. We strongly believe that if we are a heritage hotel, we must live by these traditions,” said Mr. Antony Paton, General Manager of Galle Face Hotel.

Mr. Steve Bennett from the United Kingdom who was a guest at the hotel last year adds roots to this age old incident – Colonel Francis Seymour Douglas-Hamilton who was a Captain in the Royal Artillery stationed in Colombo in 1840 when the cannon ball was fired, is incidentally a distant relation of his great-grandmother.“There is a famous family story about an ancestor who fired a cannon ball into a hotel in Ceylon, and they still keep the cannon ball on display. It wasn’t until I researched my family history recently that I was able to put names and dates to this story,” he said. “It is wonderful to be able to still view the “incredible cannonball” and the mischief done at the hotel.” 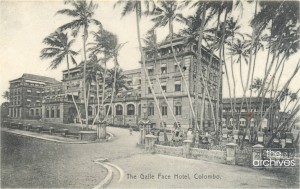 About the Galle Face Hotel : South Asia’s leading Grande Dame, the Galle Face Hotel is testimony to both Sri Lanka’s colonial past and its independent present. Celebrated within the hospitality world, it blends historical splendour with crafted modernity to form a new model for heritage properties. International guests are immersed in the Galle Face Hotel’s rich traditions and compelling stories, while Colombo society perceive the hotel as the most prestigious, desirable destination in the city for memorable dining and special events.

Whether at the hotel for dinner or for a month-long stay, an experience of the Galle Face Hotel is one of timeless grandeur and exceptional hospitality. Celebrating 150 years, the Galle Face Hotel is one of the landmarks in Asia and was acclaimed as one of the best heritage Hotels in Sri Lanka in 2012. Further it is the first Hotel in the country to be featured on a postage stamp.

The Deluxe Heritage Hotels Collection : Galle Face Hotel in Colombo and Hotel Suisse & Queens Hotel in Kandy. Each hotel is a connected to Sri Lanka’s history, imbibed with the splendor of yesteryear while continuing to serve visitors, foreign and domestic is gracious surrounds.

The Resorts Collection : 4 hotels routed in some of Sri Lanka’s most special areas offer a modern facility with outstanding vista & access to experience this great country. The Lake Hotel Polonnaruwa, The Surf Hotel Bentota, The Safari Hotel Thissamaharama and The Lake House Polonnaruwa. Each of these recently refurbished hotels offers traditional Sri Lankan hospitality to visitors. (MEDIA RELEASE)