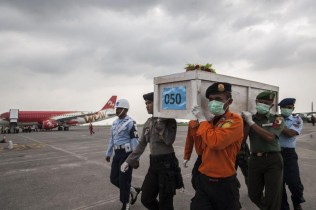 Pangkalan Bun (Indonesia) (AFP) – Indonesian divers Thursday recovered six bodies, some still belted into their seats, near the main section of an AirAsia plane that crashed into the Java Sea last month, but failed again to reach the fuselage.

Flight QZ8501 went down on December 28 in stormy weather with 162 people on board as it flew from the Indonesian city of Surabaya to Singapore. A total of 59 bodies have so far been recovered.

“We have found six bodies, four of whom were females and two males, all adults,” S.B. Supriyadi, a rescue agency official coordinating the search, told AFP.

He said they were found among debris, with some still strapped into their seats, not far from the jet’s main section.

They had been flown to Pangkalan Bun town on Borneo island, the search headquarters.

The main body of the Airbus A320-200 was spotted on the seabed by a military vessel last week following an arduous search in shallow Indonesian waters, but strong underwater currents and rough seas have prevented divers from reaching it.

The jet’s black boxes — the cockpit voice recorder and flight data recorder — were recovered last week, and investigators are analysing them.

Indonesian Transport Minister Ignasius Jonan said this week that the plane climbed abnormally fast before stalling and plunging into the sea.

Just moments before the plane disappeared off the radar, the pilot had asked to climb to avoid a major storm but was not immediately granted permission due to heavy air traffic.