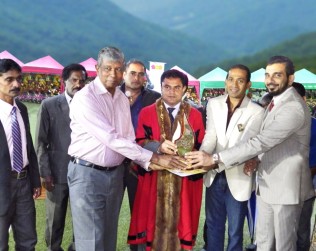 Colombo. Thursday 07 May 2015. Nuwara Eliya was a magnificent riot of colour last month when April Blossoms 2015 showcased the multi-faceted beauty and intricate skills of “floriculture” to the thousands of visitors who made their customary pilgrimage to this hill station.

“We are delighted to have been the Principal Sponsor of this national event together with Hatton National Bank and the Tourist Board. Our presence here is two-fold. Not only does it give us a chance to actively encourage the growing of high quality flowers, but to also promote creative floral designing and gardening at a national level”, says Lassana Flora’s Managing Director Dr. Lasantha Malavige.

“Floriculture is a growing industry which is rapidly expanding both on a commercial scale and also as a lucrative hobby in one’s own backyard. Given the constant demand for fresh flowers, this industry is one that will always find markets both locally and even overseas. We are deeply committed to raising the bar of the industry we operate in. Over the years we have assisted small growers by sharing knowledge and sharpening their skills which benefit them economically”, he added.

April Blossoms 2015 also featured competitions for private and commercial growers who were rewarded for the quality of their many varieties of flowers. An important feature was the floral arrangement competition which saw a few hundred entries of creative floral work. The garden competition is the only such event of its kind in Sri Lanka. Both commercial and private gardens were carefully scrutinised by the judges who paid attention to many aspects such as foliage, flowers, hedges and lawns. The distinguished Panel of Judges was headed by top officials of the Department of National Botanical Gardens.

A few years ago Lassana Flora opened Sri Lanka’s first-ever Flower Collection Centre at the Nuwara Eliya Economic Centre thereby helping the hundreds of small-growers and suppliers in the Nuwara Eliya district to transport their flowers to distant locations such as Colombo. Through this main CSR project Lassana Flora shares knowledge and expertise with suppliers on how to fine tune and further improve their growing skills and get the best possible produce.

“As one of the leading players in Sri Lanka’s floral industry, we at Lassana Flora firmly believe that it is our corporate social responsibility to constantly take the concepts of quality and creativity in our floral industry to a higher level. Competitions of this nature will surely lift the bar and thus need support at all times. Given its resounding success this year, we’re confident that April Blossoms will soon become a major tourist attraction not only in Sri Lanka but also in this region”, Dr. Malavige concluded.